What Does the SEMA Code of Practice Say About Load Notices?

The advice is approved by HSE, but it is not the only advice that end users need to follow when using racking. Rather, load notices are intended as summaries or quick reminders of HSE approved advice for the safe use of racking. Load notices do not replace the need for employers to train their staff on the safe use of racking systems, for example.

All SEMA approved racking systems have had SEMA load notices on them since the 1980s. These notices have since been updated with input from the SEMA Code of Practice, HSE, and the EU.

EC Directive 92/58/EEC was announced by the EU in June 1992. This EU directive outlined the ways health and safety signs at work should look. EU directives are not the same as EU regulations. An EU directive sets out an objective to be achieved and it is then up to each individual member state to achieve this objective in its own way.

As a result, it wasn’t until four years later that the UK turned this EU directive into British law, with the implementation of the Health and Safety (Safety Signs and Signals) Regulations 1996. SEMA load notices were modified to adhere to these regulations.

The main changes were to the colours and the designs of the different kinds of notices on the racking equipment. The original SEMA load notices used their own design as outlined in the original SEMA Code of Practice. These new ones now adhere to the national standard for safety signs and subsequent SEMA Codes of Practice have been updated accordingly.

You may notice how all safety signs in workplaces across the UK follow these regulations. “No smoking” signs are red. Caution of fire signs are yellow. “Fire exit” signs are green. “Hardhats must be worn in this area” signs are blue. SEMA load notices now adhere to these same regulations as well.


What Do SEMA Load Notices Say?

Different racking systems have different load notices, but most follow a similar structure. A typical SEMA load notice outlines the need for regular racking inspection from a SEMA approved inspector, the need to adhere to the SEMA Code of Practice, and the need to contact the supplier of the system if you unsure about anything as yellow warning signs. A mandatory action is given in blue that all damage should be reported to the racking safety officer. Finally, a red sign prohibits climbing on a racking system or altering the racking system. All of this information is listed on the left of the load notice. 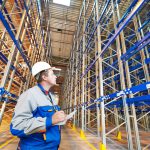 What I've Learnt After Writing Over 100,000 Words on Racking Inspections

6 Things to Ask Before Choosing a Racking Inspector 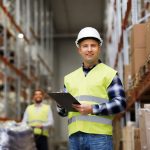